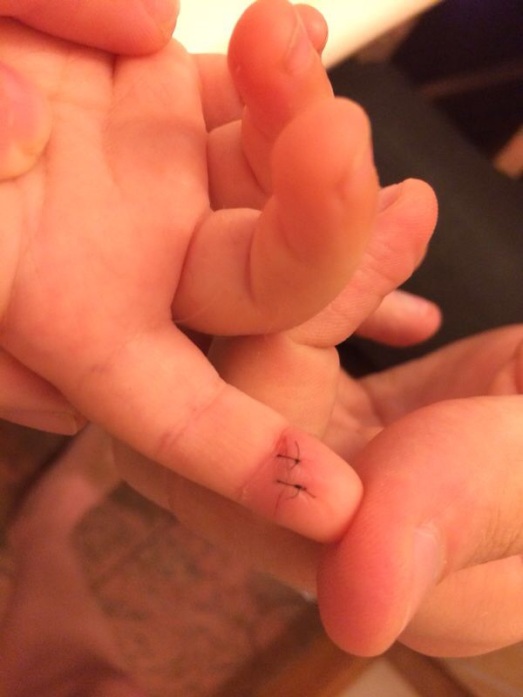 A few weeks back (Monday June 2nd, to be exact), Jude and I were chatting with my sister, Jen, when the accident occurred. Jude was sitting next to me playing with one of Luke’s triathlon medals. He likes to put it on, turn it over in his hands, etc. It’s made out of a very, very hard plastic, so I didn’t think it could be potentially dangerous to him.  But as Jen and I were chatting away, Jude let out a big cry. I looked over at him and saw his finger was covered in blood and he was holding the medal, which had been snapped in half!

I quickly hung up with Jen and quickly began dealing with the situation. I picked Jude up, ran him over to the sink and stuck his finger under cold water to try and get a good look at the wound. He was screaming and the blood kept coming so the next step was to try and stop the blood, so I grabbed a dry washcloth and wrapped it around his finger and secured it using a hairband. After a while I was able to calm Jude down a bit but I could see that the washcloth was already soaked in blood!

It was a public holiday so Luke was home from work but before it happened he had stepped out to run an errand. I was calling and texting him but no answer. I started gathering stuff for a trip to the emergency room (hoping Luke would come home in the meantime and help me assess the situation). And just like that, he walked in. At this point it had been more than 10 minutes since the accident and still bleeding. He had a look at the cut, and agreed we should go in. So we grabbed a cab a made our way to the nearest hospital (3 mins away!).

The whole process in the ER was relatively smooth. Jude laid on the hospital bed with Luke and watched Elmo videos while the Doctor gave him a shot of anesthetic and then stitched him up. He recovered from the whole ordeal relatively quickly – we both seemed to feel way worse! After the ER we stopped for ice cream and then returned home.

After a much needed nap for Jude, we went out for a family walk. The Doctor warned that when the anesthetic wore off he would probably experience a bit of pain, so we were keen to distract him. Since he had just started walking we decided it was a good opportunity to go shoe shopping. 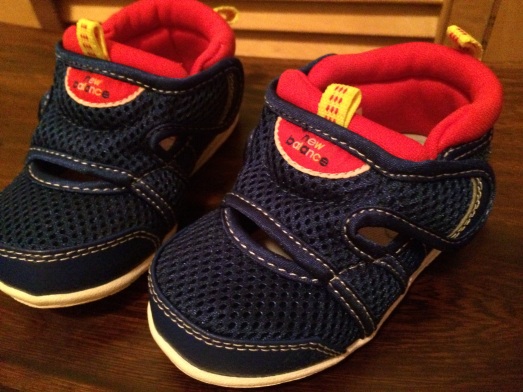 After shopping we stopped in at a bookstore and browsed.

It was interesting to see how quickly he stopped using his right hand to do things and started using his left.

Over the course of the week as his finger healed he switched back to using his right hand. (Like while posing eating a chocolate bar at the store as the shop assistants took photos of him). 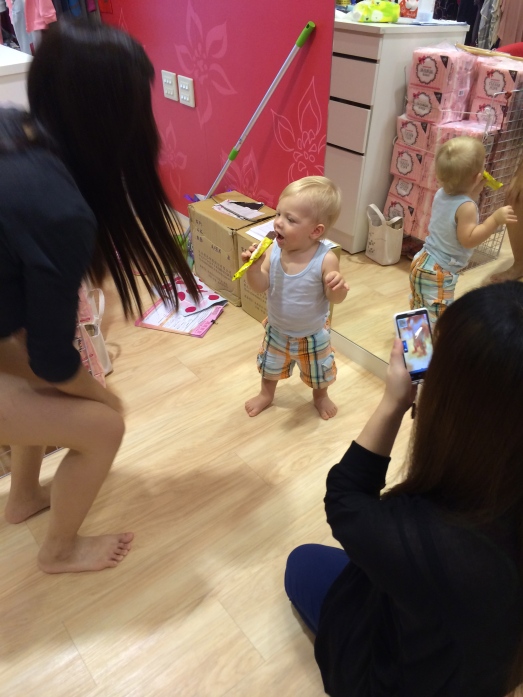 We had a ten day wait for the stitches to be removed during which he was unable to get his finger wet. So no swimming or baths. We consumed lots of cold treats to keep cool and kept him clean with sponge baths. 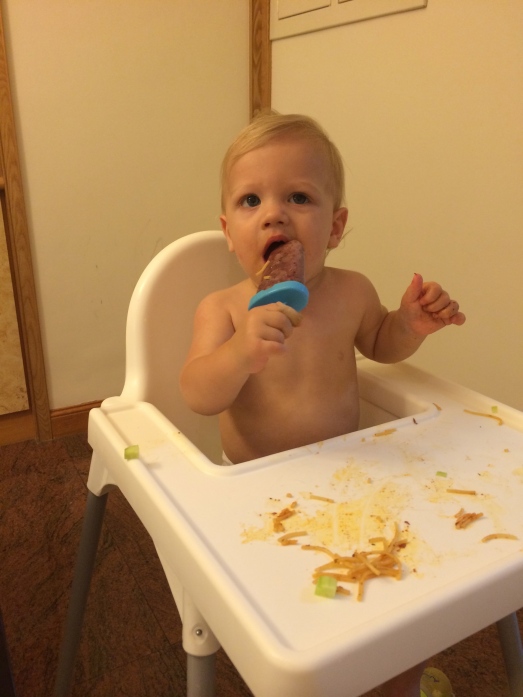 And finally, it was time to have the stitches out.

The wound has healed nicely and he may not even be left with a scar.