In February, my parents made one last trip over to Taiwan before we leave for good. They arrived on a Friday and so at midday came with me to pick-up the boys. It was quite the surprise!

For our first lunch we had potstickers and dumplings.

The boys went crazy when they saw the PJ Mask figurines Grandma and Grandpa got for them. Big hit!

I had a haircut planned that day so I said goodbye to the boys and left Mom and Dad to it. They were troopers to watch the boys considering how exhausted they must have been. They even put the boys to bed that night as Luke and I had a dinner with friends. 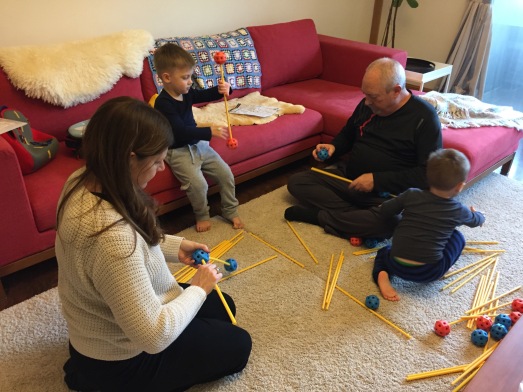 On Saturday we drove out to Juming Museum and wandered around the sculptures.

It’s such a cool museum with lots of great activities for kids.

And Saturday night we headed to Chilis for dinner and margaritas. 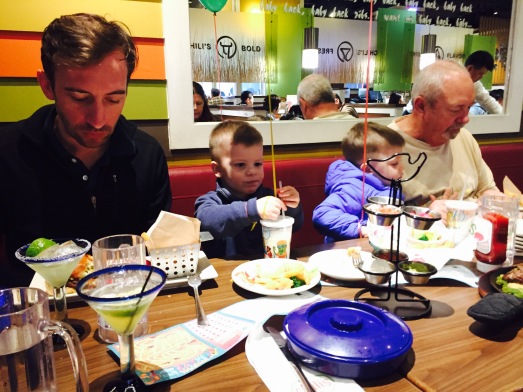 Sunday we took Mom and Dad to a fancy hotel in Dazhi for an Australia/New Zealand Day lunch celebration. It was a great opportunity to introduce them to a lot of our friends in Taipei. The food was great and we all got lucky and won several raffle prizes. 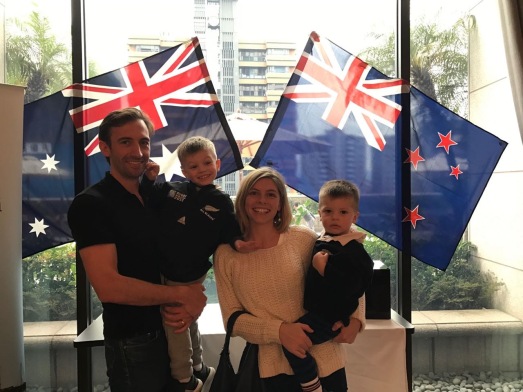 On Monday, with the boys back in school, we were able to do some longer walks and have nice breakfasts out. 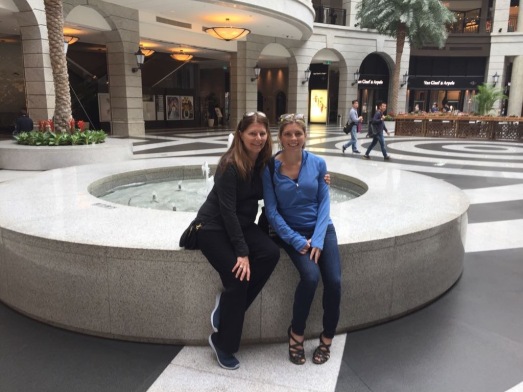 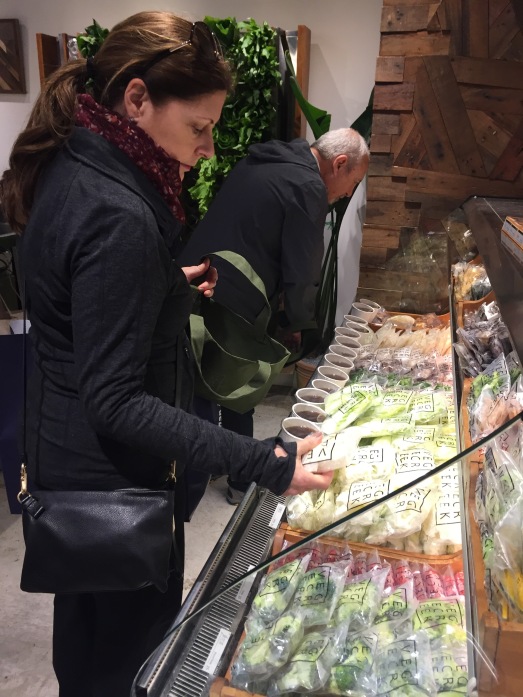 Getting the boys off to school each morning was a struggle as they wanted to stay home and play with Grandma and Grandpa instead. Thankfully they were always happy after school but then it would be a struggle getting Toby down for nap. So much FOMO going on.

Jude, much more so than Toby, was all about Grandma and Grandpa. He was attached to the hip with them and managed to get a lot of one-on-one time. 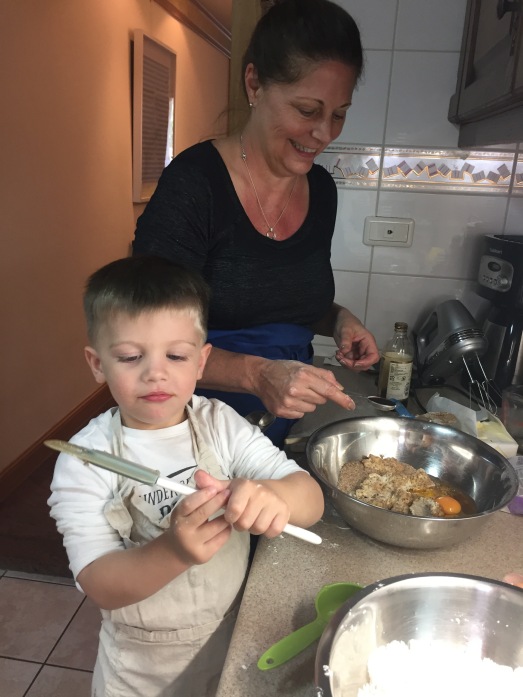 Lucky Jude got to go see the Lego Batman movie with Grandpa one afternoon while Toby napped. They stopped and got donuts after and bizarrely enough there happened to be a news camera crew at Krispie Kreme at the exact same time they were there and so we discovered from his teachers that Jude was on Taiwan’s nightly news picking out his donuts!

One sunny day after school we picked up a bunch of food from 7-11 and had a little picnic with the boys. 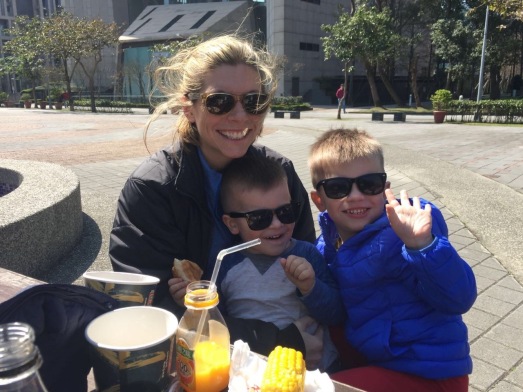 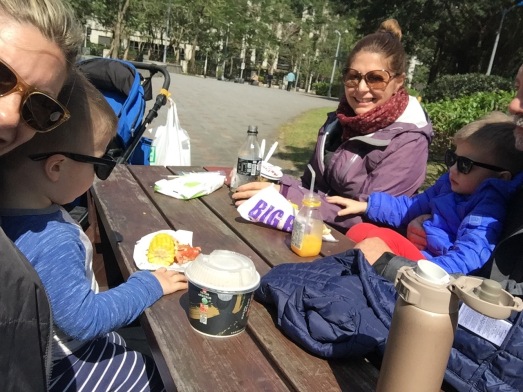 On Valentines Day, Mom and I did yoga together and then went out shopping and for dinner.

The big highlight of the trip was travelling to Cebu in the Philippines. We were all hanging out for some sun and warmer temperatures. We had a 7am flight to Cebu so we stayed at the airport hotel the night before. Grandma and Grandpa showed off their ping pong skills to the boys.

Arriving in Cebu felt great. It was raining when we landed but warm and not long after we got there and checked-in we were drinking margaritas overlooking the beautiful beach.

Jude and Toby loved this lady, who they called ‘princess’.

We spend 4 nights in Cebu at the Shangri-la and it was fabulous. Hands-down one of the coolest things about the resort was how kid-friendly it was. The boys had a ball everyday playing on this water playground.

The water slides were for kids-only which we found out right after this photo. 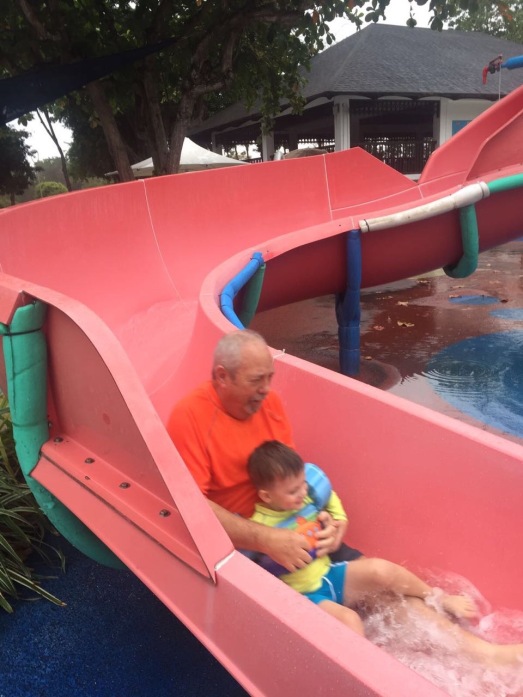 The pool area was so perfect for little kids. We loved the kids pool which was quite big and even had a canopy slung above it to keep the sun out. 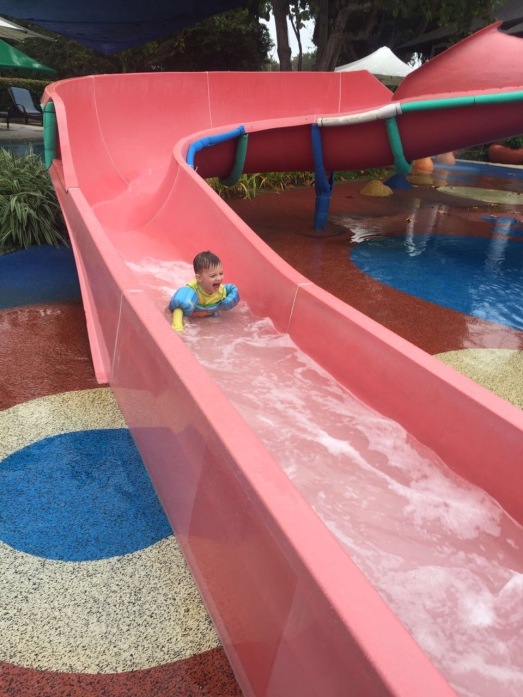 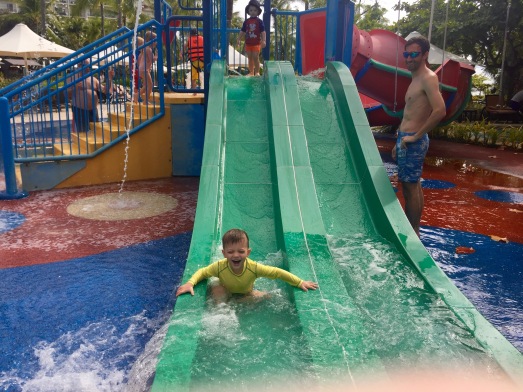 Most days, after several hours at the pool, we would grab NZ Natural Ice Cream and chill out in the shade.

The beach was also one of the better ones I’ve seen for kids as there were tons of shade umbrellas for guests to use. 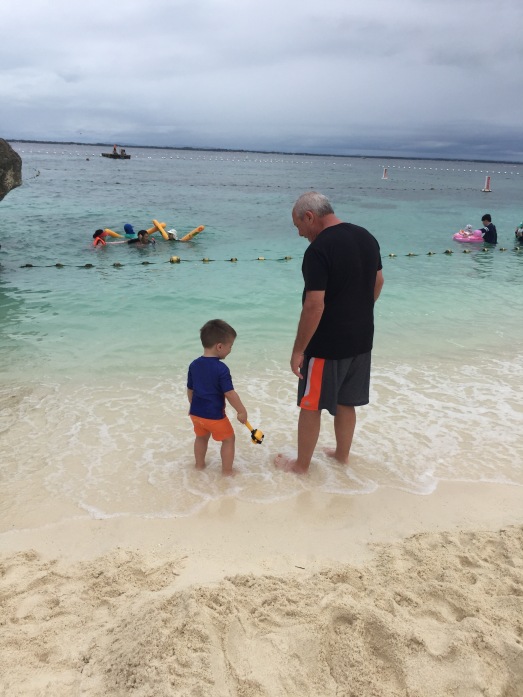 We had breakfast outside every morning at Aqua, in the Ocean Wing. The boys loved getting a donut there every day.

Luke and I snuck away one night for date night but ended up at the same restaurant as my parents and the boys! 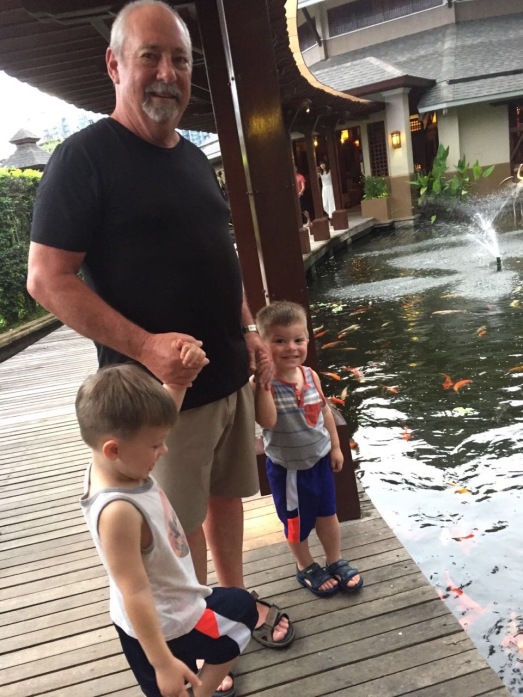 Here are some more photos from our trip- so many good ones. 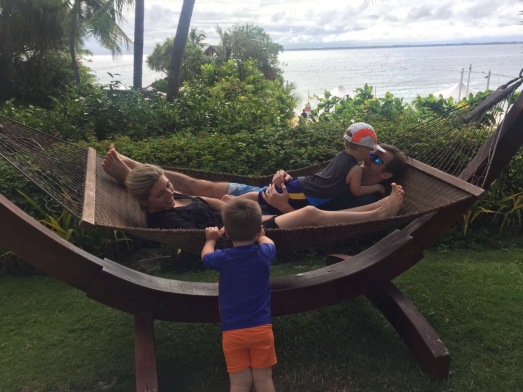 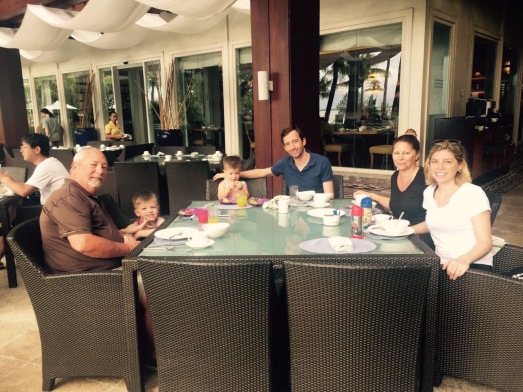 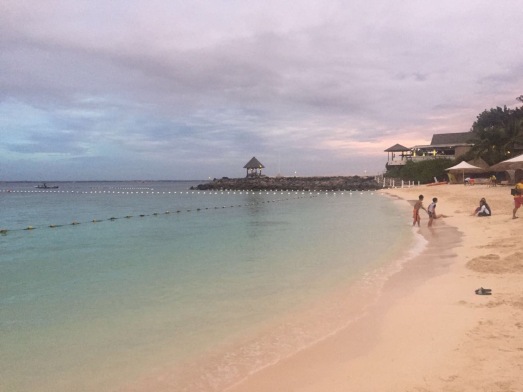 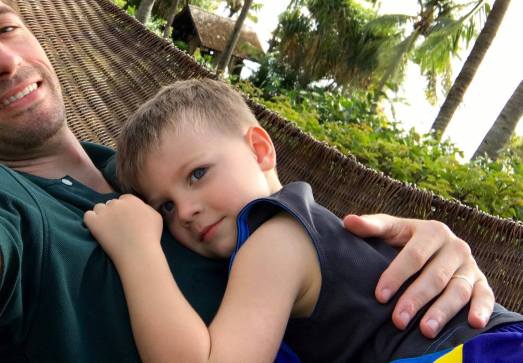 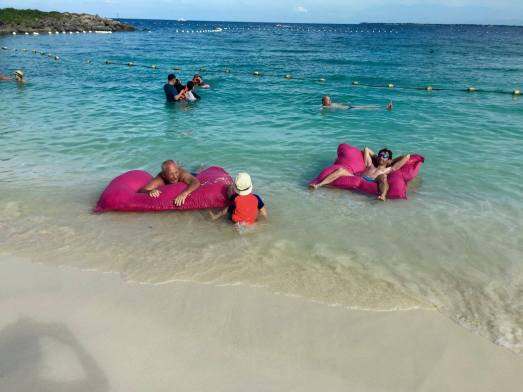 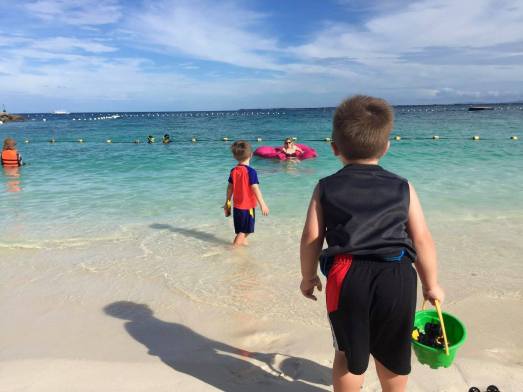 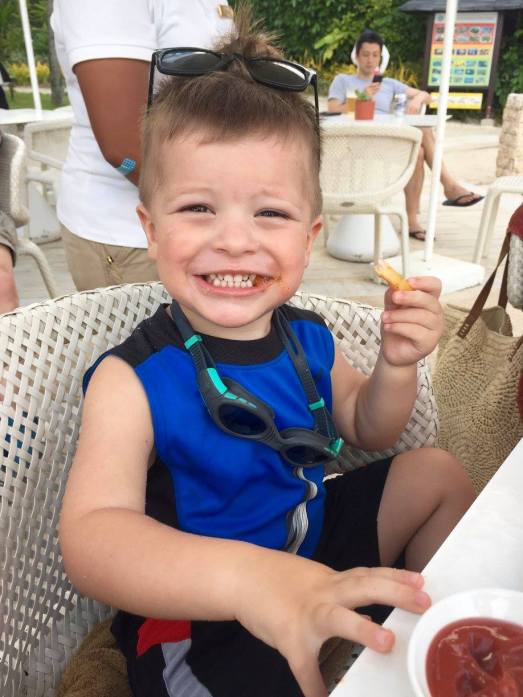 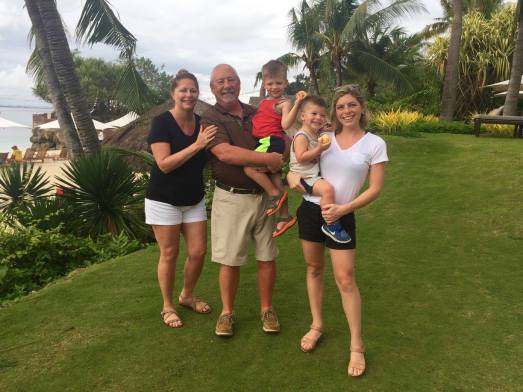 Back in Taipei we had several days before my parents flew back to the States. We had dinner at Commune,the food truck area, one night. 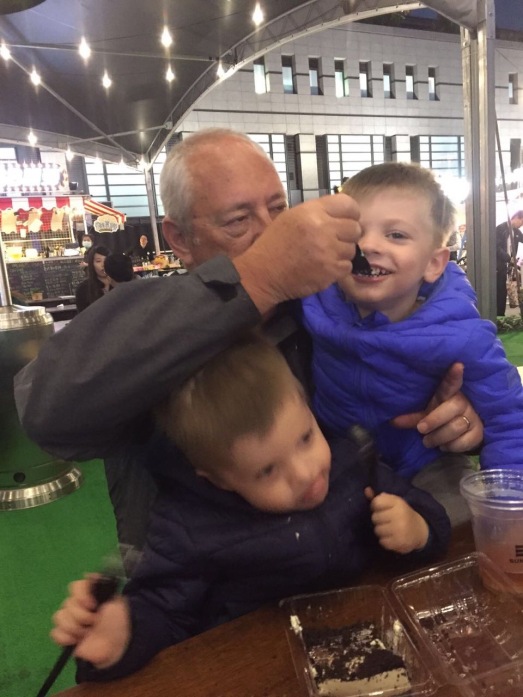 We also took a trip in the Gondola up to Maokong. It was cold and raining so we didn’t stay long. 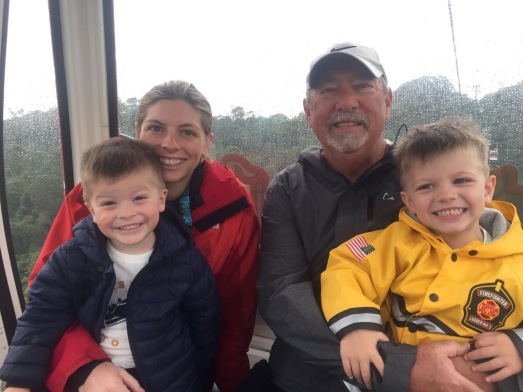 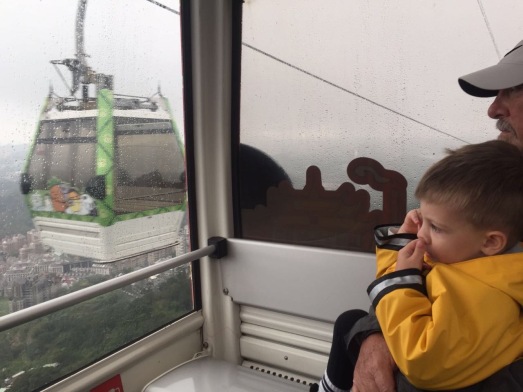 Jude got to go to the movies with Grandpa and Grandma to see Moana again. Burger King, popcorn and ice cream – lucky boy! 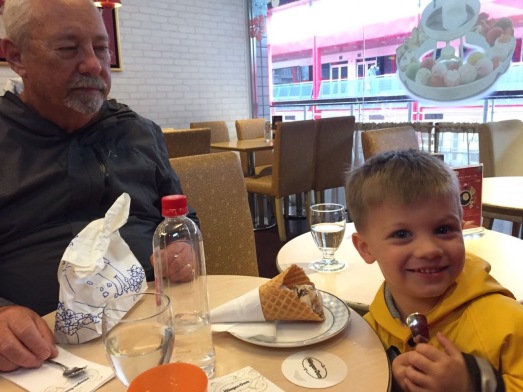 Of course no trip would be complete with out a meal at Din Tai Fung.

And for their last night out we went out without the boys for a more relaxing meal at our favourite places for Shanghai and Szechuan cuisine.

On their last day we picked the boys up from school and they played one last time before saying goodbye.

It was a great trip with so many great memories had (even by our little pout-pout fish, Toby!). Our goodbye this time wasn’t as sad as it usually is as we will be together again in no time.  See you guys in May!