It was a big month for Jude.

He is officially potty trained!

I woke up one morning and decided to go for it. He’d been showing a lot of interest in the potty again. The first time he showed a lot of interest was when he was around 16 months old. I decided against going for it then and I am so happy I did. Waiting was the best decision. Most importantly, he now has the language ability to tell me when he has to pee or poo. He has also displayed bladder control by waking up from naptime with a dry nappy. He is also a lot more settled than he was at 16 months (as we had Toby on the way).

So, I took off his diaper and and whenever he said he had to pee, we ran over to the potty. The first few weeks I would ask him a million times but then realized it wasn’t necessary as he eventually started telling me.

We had a few accidents the first few days but by the fourth day we had it down.

I started taking him out without a diaper everywhere.

I was nervous at first because it’s not always easy to find a bathroom when out and about. 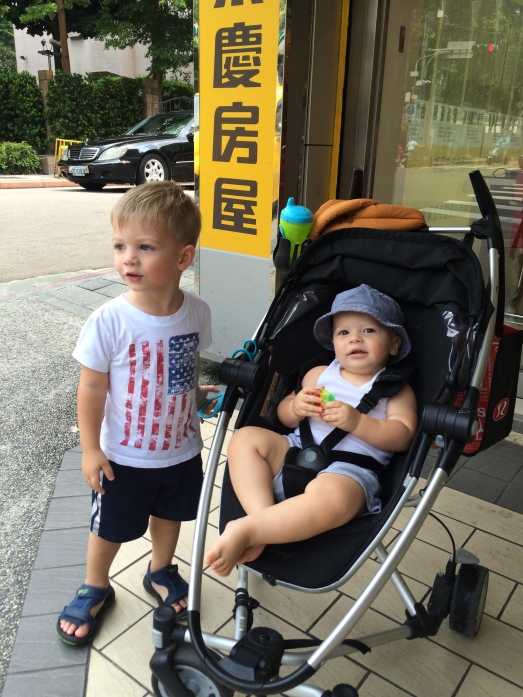 But thankfully Taiwan has a law that allows for kids to basically pee or poo outside! So we usually make our way to the closest tree when outside and no bathroom is in sight.

The second week, I introduced Jude to underwear and he has had a lot of fun getting to pick out a pair everyday. He’s been trained now for about three weeks and I feel totally confident taking him wherever. I still put him in pull-ups for naptime and bedtime but probably 80% of the time he wakes up dry and asks to use the potty right away. The whole process has been way easier than I expected. I still expect that we will have to deal with future accidents, especially if he super absorbed in play. But for now it is nice to have one out of diapers. 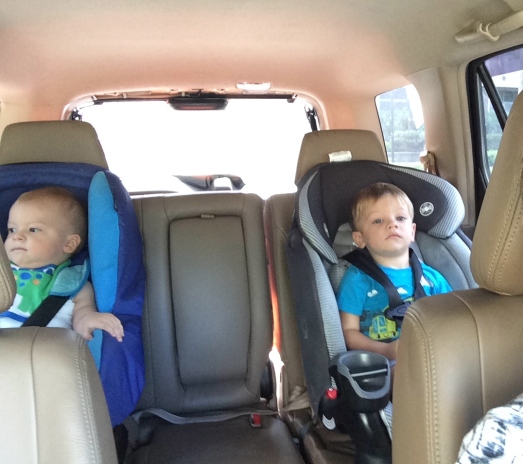 Besides a lot of sitting on the potty, Jude had a modelling shoot this month. 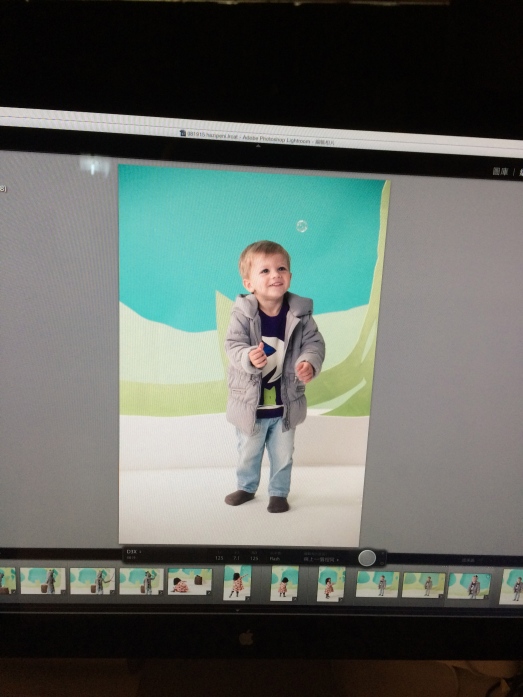 I was asked to model with him which was fun but a lot of work to get us both smiling and looking at the camera at once. 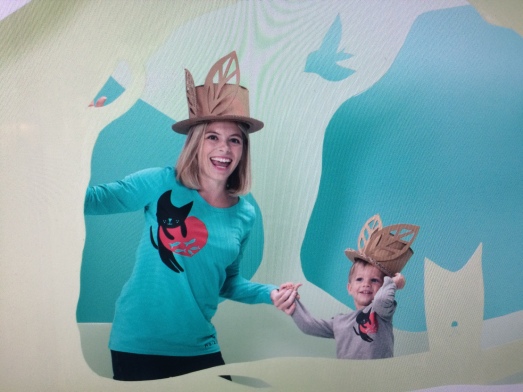 Typhoon Souledor ripped through Taiwan this month. It was scary!

So many trees were knocked down throughout the country. Our playground turned into a tree fort for a few days which Jude loved. 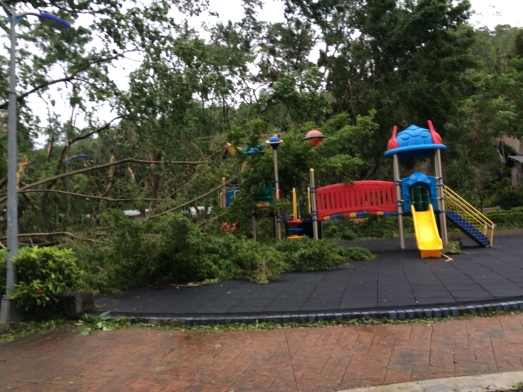 We woke up as the eye of the storm was passing over us to find our apartment had been flooded. We had about a cm of water covering our floors. The drains on our outside decks couldn’t cope with all the rain and so as the deck filled up, water would come in through the door. It was a long, exhausting day mopping up all the water. We kept Jude in front of the iPad and Toby in the highchair and Ergo while we worked as we couldn’t have them running around. 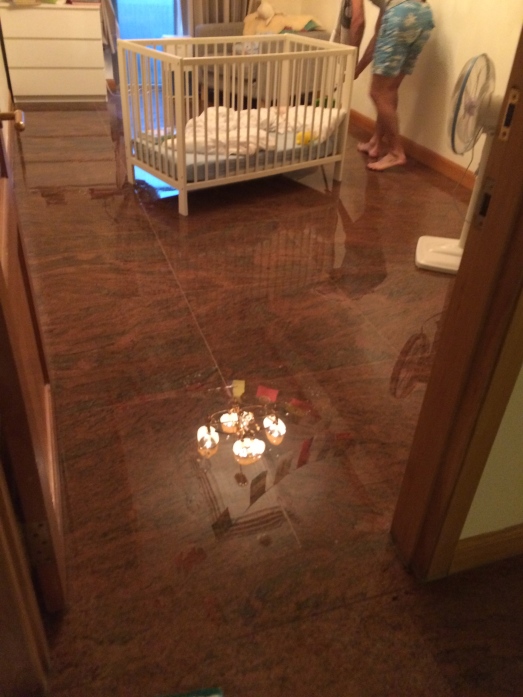 On a calmer note, we noticed that Jude is starting to enjoy longer, more detailed books. It’s been fun for us to read him proper stories. He is in love with his Richard Scarry word book. It’s such a great book, with so much detail. It’s easy to spend a 1/2 hour on one page looking for things or making up a story.

Jude has also been really into painting and drawing this month. I set him up a little craft cupboard he can go into anytime and grab art supplies.

We also play a lot with the magnetic sand now. It’s such cool stuff.

His car-craziness has calmed down a lot. He still loves playing cars but he no longer carries them around everywhere or brings them to sleep with him. He is really into role-playing now. We make a car out of pillows and he will sit in it for hours pretending to drive and push buttons. He also loves to sit on our laps and use our hands around him a safety belt. He will push the moles on my body (while saying ‘this button’) as I make funny car noises or bounce him up and down. Rocket ships have also featured big this month. He loves the ‘3,2,1, blast-off’ as he goes running through the house and then yells ‘mayday, mayday’ and crashes onto the couch. Both Toby and Jude love when Dad is the rocket and flies them around, always ending with a big crash and eruption of laughter and Jude saying, ‘again, again.’

We’ve had one big, bad incident this month, which ended in a trip to the ER for Toby, but thankfully no broken bones. I will write about it on Toby’s update. Besides that, there were a few other incidents of Jude pushing Toby out of the way or grabbing something from Toby’s hands and bringing him to tears. But for most of the time they play pretty well together.

And Jude just loves being helpful and doing things for Toby.

One day Jude snatched my phone and I later found out they were taking selfies. I was laughing so hard at the photos.

Toby is really into kissing so will often lay a big, wet smootch on Jude and Jude will wipe his mouth and go, ‘ohhhh Toby!’

Jude loves being the first into Toby’s room after Toby wakes up from a nap. I love watching them on the monitor – it’s so sweet.

It’s busy, busy, busy all day long with these two boys but so much fun. 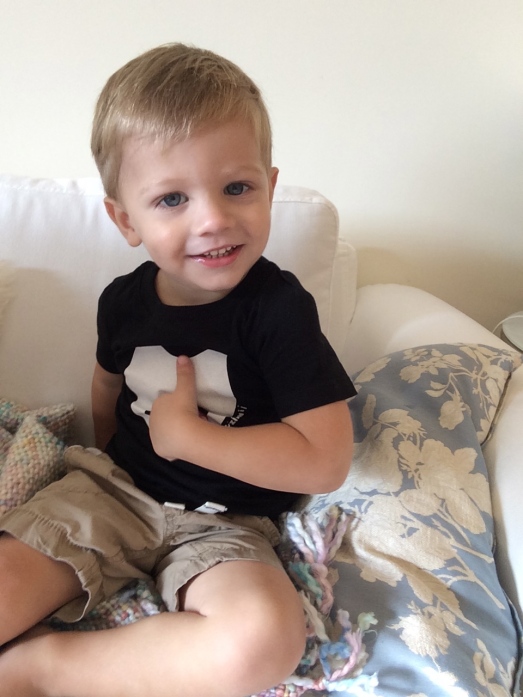