Jude started the month off as a Fireman, 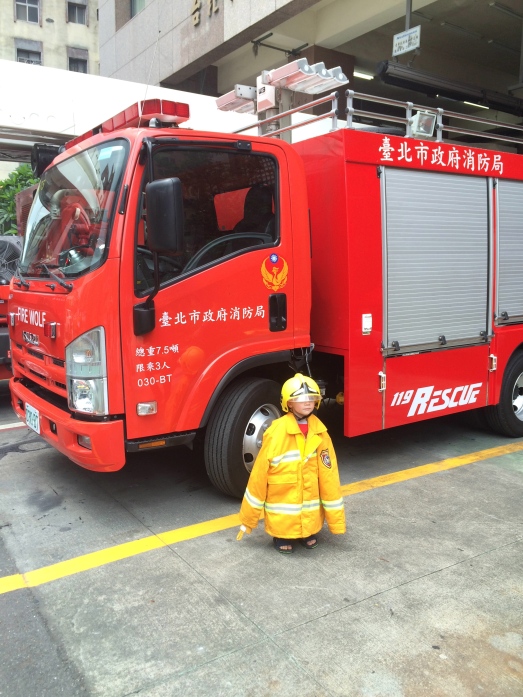 And then did some toddler modeling,

Rode a train with Dad, 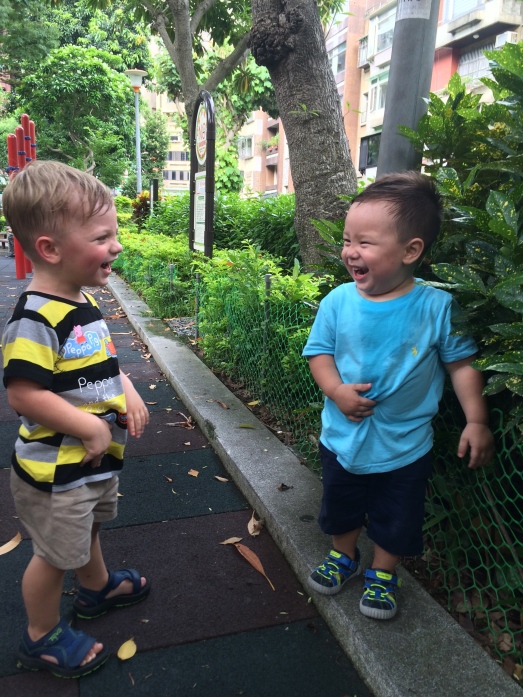 And as if his month couldn’t get any more awesome he flew to my parent’s house in Ohio.

At 26 months, Jude is a total chatterbox with a big personality. He loves to get right into things and really experience life firsthand! 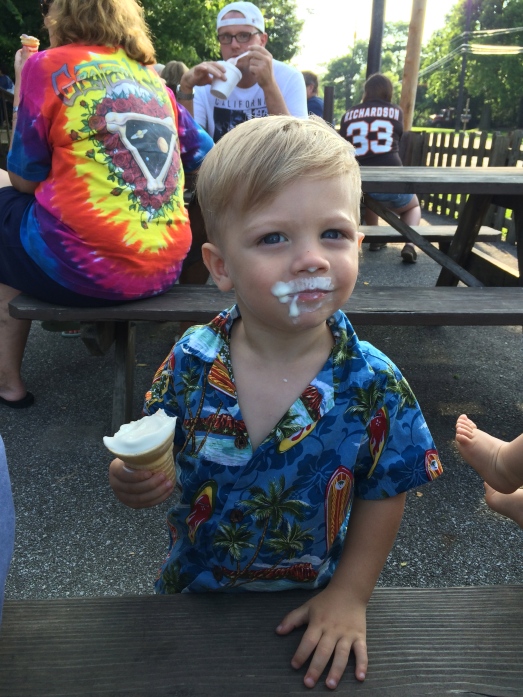 His car and truck obsession continues and while in the States he got to see a garbage truck in person for the first time ever. 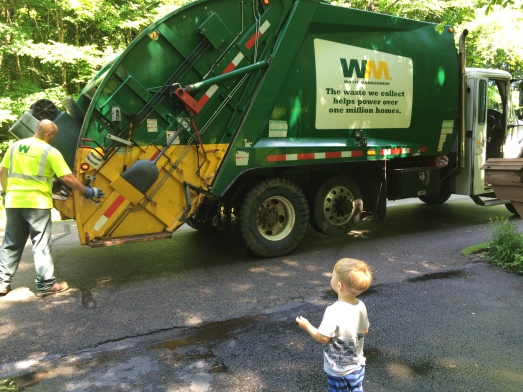 He’s a super active kid – loves running,  jumping, rolling, dancing, and chasing or being chased. He will often yell out ‘Daddy, chase’a me!’. 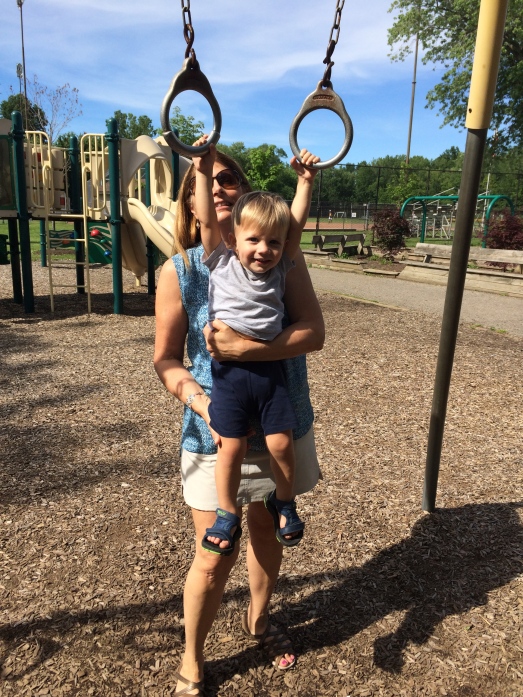 The Jude that once would eat anything has disappeared and he has become a picky toddler. Mealtime can be a battle most days with him, which I am hoping is just a passing phase. I have noticed that he eats much better when involved in the cooking process, when he has some choice over what he eats, or when he gets to serve himself. Still, there are a lot of things I can get him to eat without any struggle: french toast, egg sandwiches, chicken nuggets, french fries, and edamame. He loves fruit, which is great but I usually have to sneak cooked vegetables past him by cutting them up really small and mixing them in something like fried rice. In the States, we supplemented his diet with lots and lots of ice cream.

Every month Jude becomes a better big brother to Toby. He has finally started consistently calling him by name. He is always quick to try and comfort Toby whenever he is upset. And recently he has begun to do silly things to make Toby laugh. He has also made a few attempts at fun tackles with Toby. To their disappointment I sweep in and rescue Toby before things get crazy but I can see it won’t be long before they are rolling around the floor wrestling each other.

While in Ohio, Jude fell madly in love with my parent’s cat, Oz. I used to find him so annoying as he is a cat that always needs to be in your face – sitting on top of the newspaper you are trying to read, or on the counter while you are trying to cook. But I changed my view of him after seeing how awesome he was with Jude, and how tolerant he was of Jude laying on top of him and attempting to pick him up.

The first thing Jude would ask for when he woke up in Ohio was to see Grandpa. Jude just wanted to do whatever Grandpa was doing. 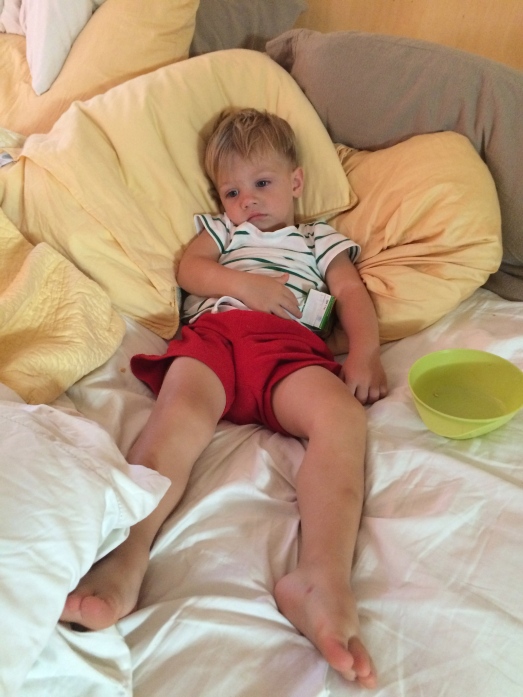 Ohio is super green in the summer and my parents have the perfect yard to enjoy nature. Jude is a great age for it too. Everyday we went out exploring – down at the pond looking for frogs, snakes in the grass, birds and more. 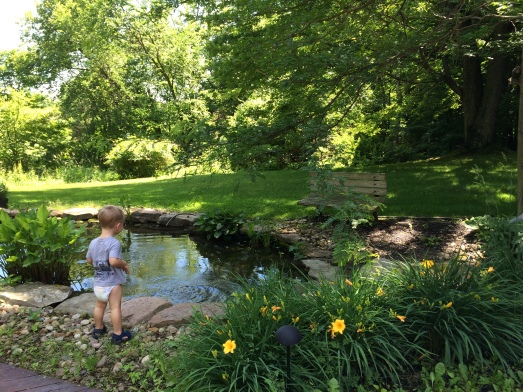 Jude and Grandma went out one morning to a pet shop and bought new fish for the pond. 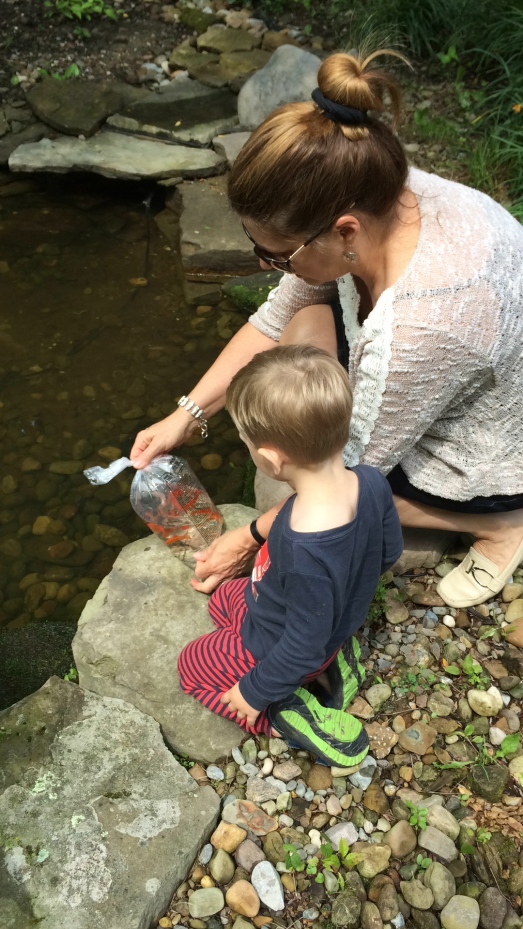 Jude even got to ‘swim’ in the little creek that flows into the pond.

It rained on and off when we first arrived and so he got to do a lot of puddle jumping (just like Peppa Pig).

Defiance is a theme my friends with two year olds and I are often talking about. It seems to be the age when they are constantly testing the boundaries. Jude will countless number of times a day. I just try my best to repeat the rules and same messages over and over ad nauseam. I find that (when he is not in the mood to defy me) Jude actually really likes following rules. In fact, he will get upset if I do something that does goes against whatever he thought the rule was. For example, if I don’t take my shoes off right away when I walk in the door, he will say ‘Mommy, shoes off’. 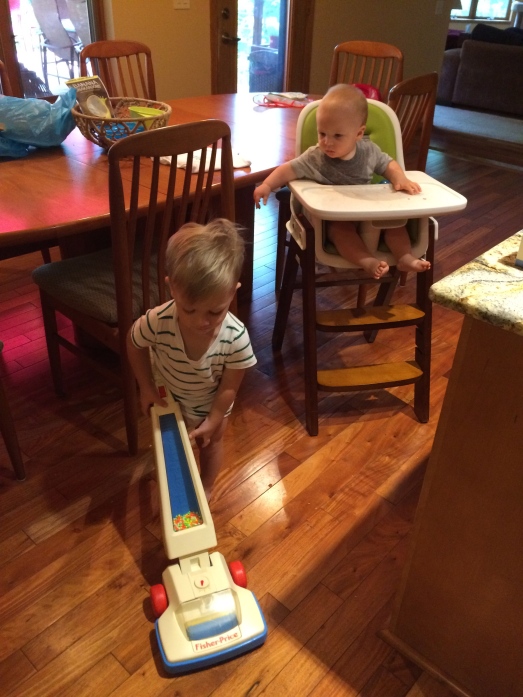 He also really likes routine and for things to be predictable. Traveling was rough on him. He acted up a lot as a result of all the moving around, new environments and different faces. It was hard getting him used to a new crib to sleep in, too. 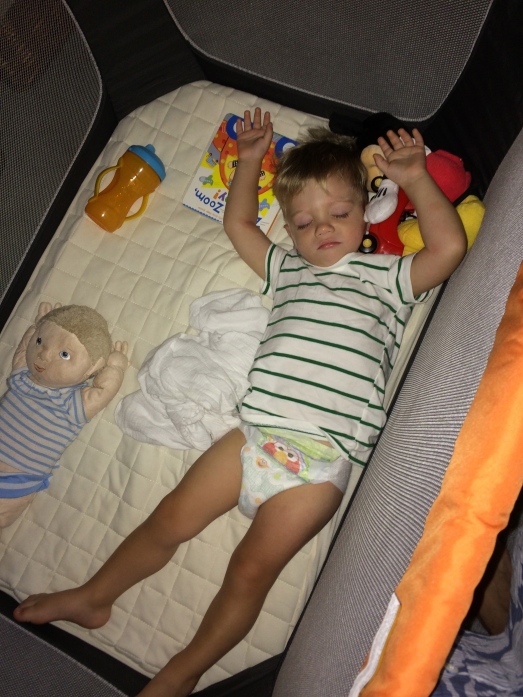 In Ohio, he was always trying to sit in the driver’s seat of my parents’ car. He would kick and scream, ‘drive car, drive car’ whenever we put him in his carseat. I would just repeat to him that he can drive when he turned 16 and then we would count from 2 to 16. Poor kid doesn’t realize just how long of a wait he really has!

Luke and I will often lay in bed at night and recount the silly, awesome things Jude will say or do. 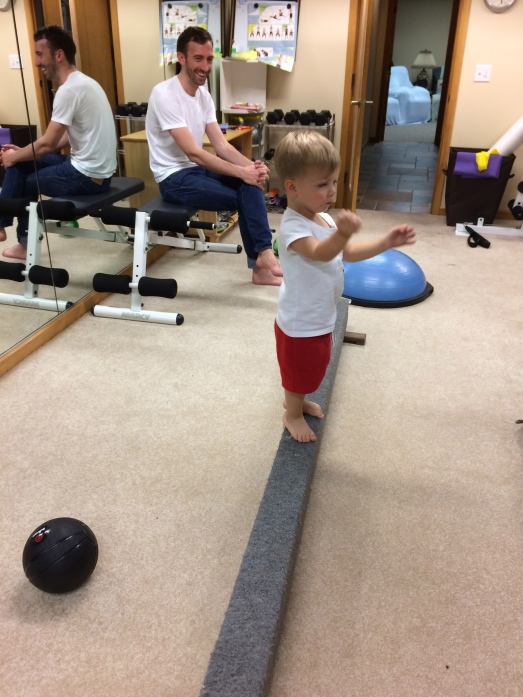 What a great month it was. 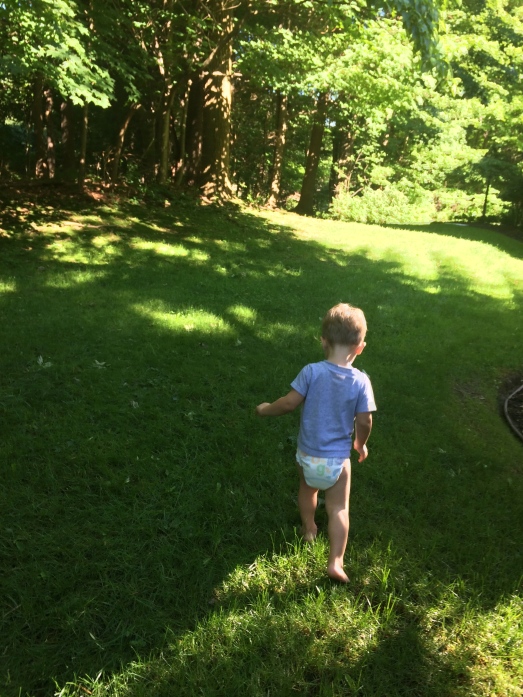