Since this Christmas was the first as a family of three, we were keen to start some of our own holiday traditions. The one I came up with was making our tree rather than buying one. My parents had sent Jude a rather large box of Christmas presents which I was keen to utilize. After a google search I found a tutorial. 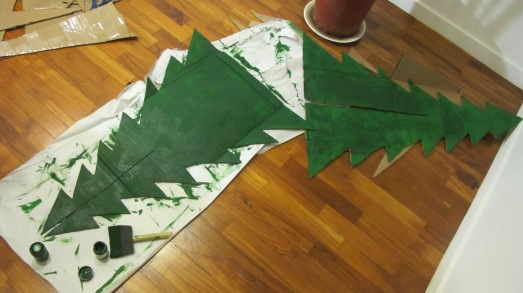 It was surprisingly easy to do and it only cost $2 for the paint.

Then I started trimming the tree using old bits of wrapping paper I had saved and ribbons. I made a star out of doilies for the top. 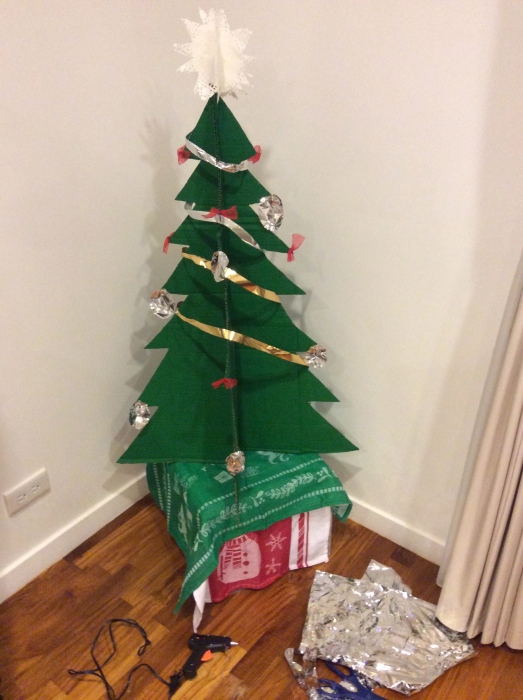 The rest of the ornaments had been given to us as presents in the past. After arranging the presents around it really start to look and feel like Christmas. 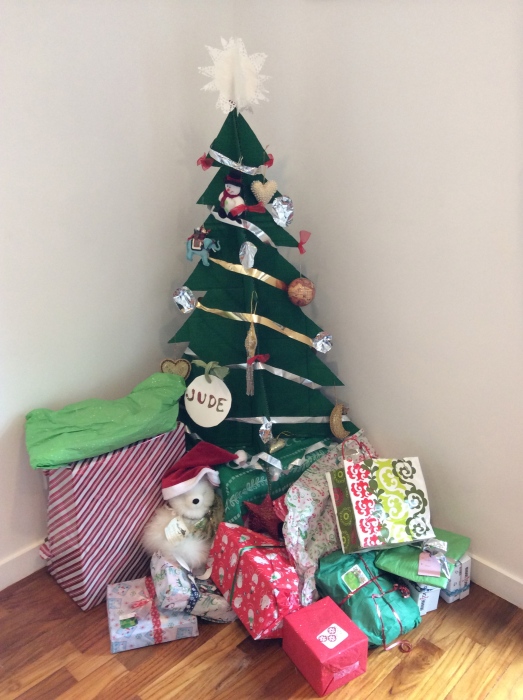 I thought one of the benefits of the cardboard tree would be that the cats wouldn’t eat it, like they would for a real one. Instead they thought it was fun to climb up it and knock it over.

Another tradition we started, which we always did in my family growing up, was make Christmas cookies.

I used a basic sugar cookie recipe and a buttercream frosting. Rather than eating them ourselves we gave them away to our friends and Luke’s colleagues. 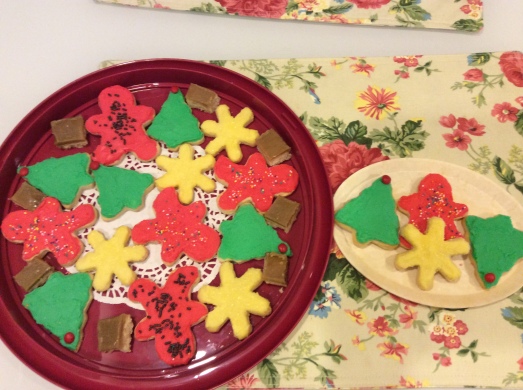 Since it was Jude’s first Christmas, and we are in Taiwan, I thought it would be fun to take him to get photos with a Taiwanese Santa.

He was really confused about what going on. When I put Jude up on his lap, the people waiting behind us in line all went crazy snapping photos of Jude. I guess it’s not everyday you see a Western baby sitting on a Taiwanese Santa’s lap! Jude was a good sport and only started letting out a cry at the end!

On Christmas morning Jude woke up an hour earlier than usual and so at 5:30am we started our morning routine. First bottle,

then breakfast (scrambled eggs and toast),

and then we let him loose on the presents.

We Skyped with my parents and Nat while we opened everything so they could see his reaction.

Jude clearly did not know what was going on,

But he really didn’t mind as he had all these cool new gadgets to discover.

Funny though, the best part for him didn’t exactly seem to be  the toys but the wrapping that they came in!

So he continued to play in the garbage pile until nap time. 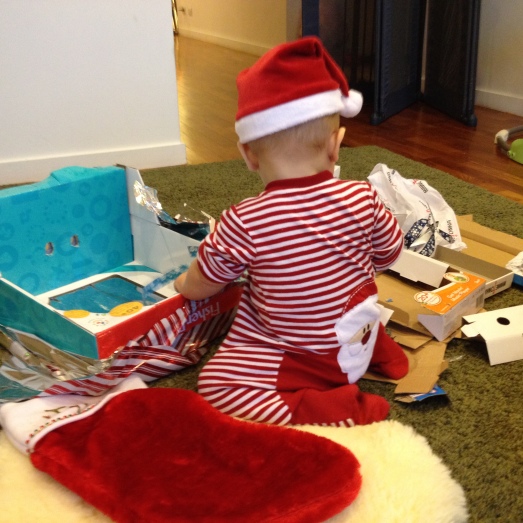 After his nap, we got our things together and drove 3 hours south to Nantou where we were staying the night with some friends.

We were booked in these nice cabins at a hot spring resort.

We spent the first afternoon hanging around in the hot springs – which Jude looooved! 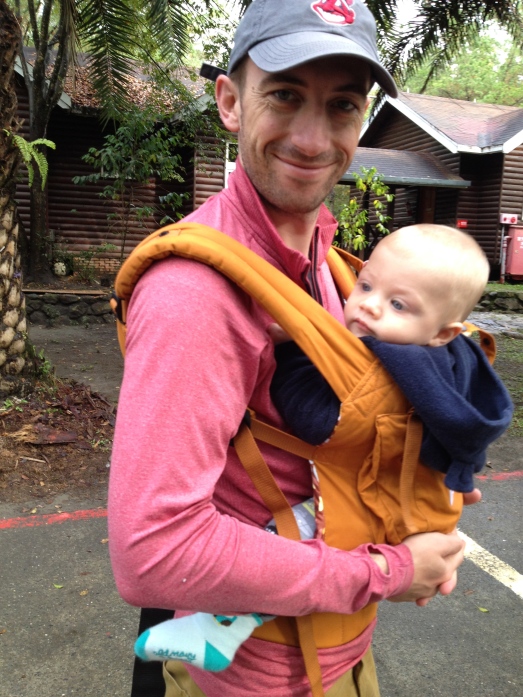 Our friends all had kids too, five between us. And in fact three of them were born this year! So it was pretty special having three babies’ have their first Christmases together. 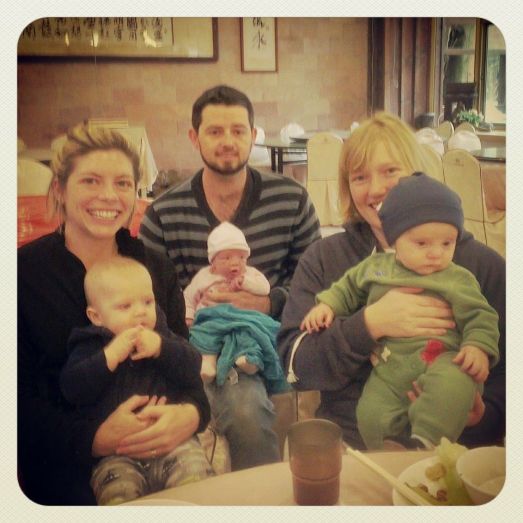 After the kids and babies were all put to bed, the adults hung outside the cabins and had a Christmas BBQ feast. We had ham, sausage, chicken, roast veggies, salads, and amazing desserts. After we hit up the hot springs and drank wine until there was no more left! 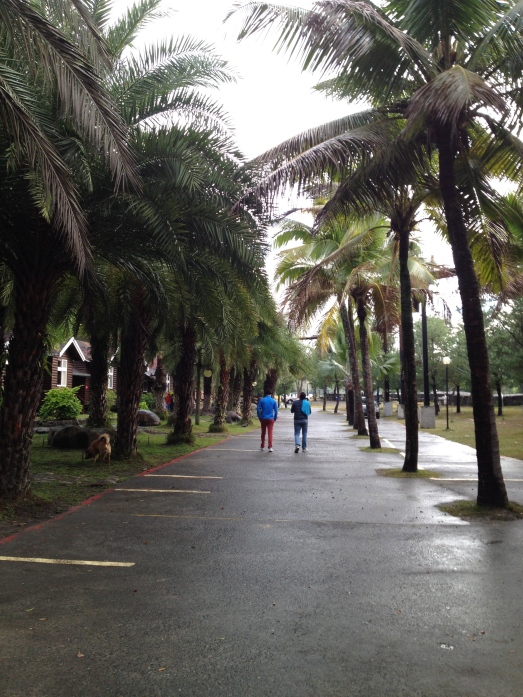 The next day we awoke to more clouds but they soon disappeared and the sun was out! So we lounged around in the grass letting the kids play,

while the adults drank coffee and chatted. 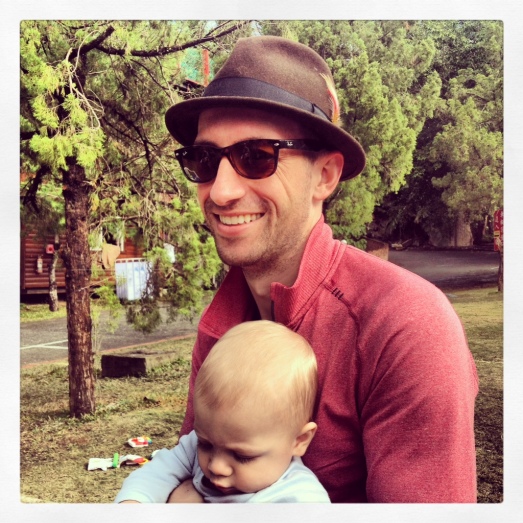 And after morning naps we went for a group hike up a grueling hill. 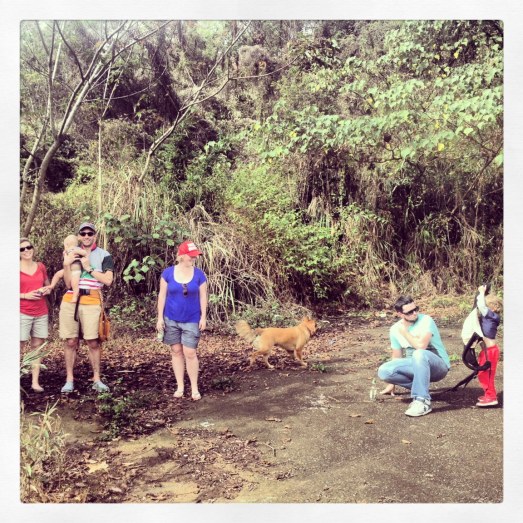 But it usually is always worth climbing as you’re bound to get a good view. It was a wonderful and speciall first Christmas as a family of three.

It is still so hard for me to believe last year at this time we were like this: 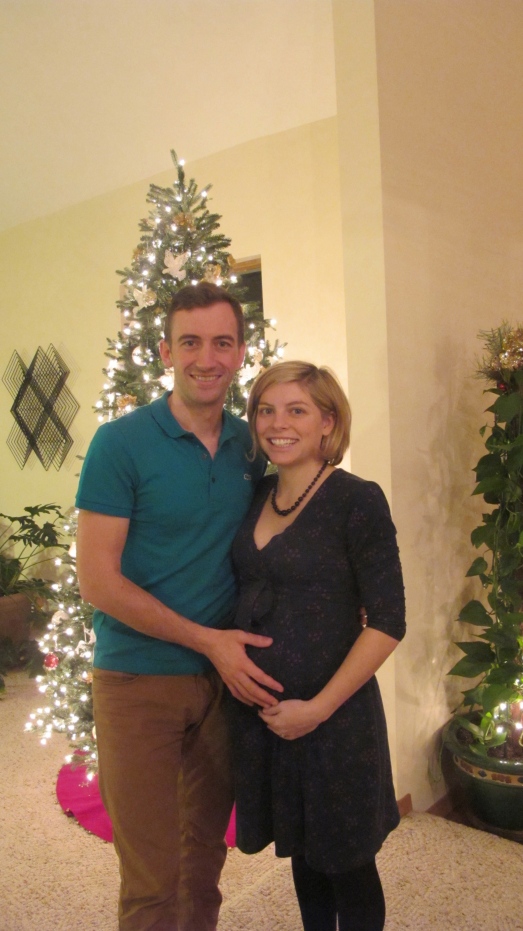 We are very much looking forward to all the Christmases to come and continuing with our little traditions and making new ones.